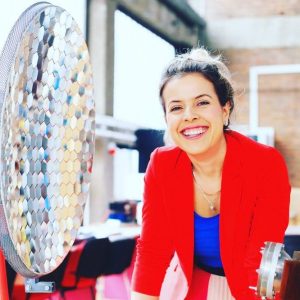 Lead expert in the field of green hydrogen in Croatia.

Be the kind of girl that when your feet hit the floor each morning the devil says: oh crap, she is up!

Ankica Kovač is an Assistant Professor at the University of Zagreb, Faculty of Mechanical Engineering and Naval Architecture in Croatia. She is head of Power Engineering Laboratory. Ankica holds her Ph.D. in green hydrogen production, i.e. hydrogen production via water electrolysis using solar energy. She is a Guest Editor of the International Journal of Hydrogen Energy. Ankica is the founder of the Regional Hydrogen Energy Conference – RHEC which is going to be held for the first time in May, in Opatija, Croatia. She designed the first Croatian hydrogen-powered bicycle and installed the first Croatian hydrogen refuelling station. To promote hydrogen transportation, in cooperation with Toyota Croatia Inc., she organized Croatia Mirai Challenge as the road trip from Zagreb to Brussels. She is the project leader of ‘Securing electrical energy in the case of climate extremes and natural disasters’ within which will be a developed system based on green hydrogen production and usage in fuel cell stack. This project is funded through European Fund for Regional Development. Furthermore, she is the project leader of ‘Advanced methods of green hydrogen production and its transportation’ funded through the Croatian Science Foundation. As a member of the Executive Committee of The Collaboration Programme on Advanced Fuel Cells, she is the official representative of the Republic of Croatia. Ankica is a member of the Council of the President of the Republic of Croatia for Energy Transition and Vice President of the Croatian Hydrogen Association. She was awarded the Croatian Woman of Influence Award in the category of Leadership and Innovation.